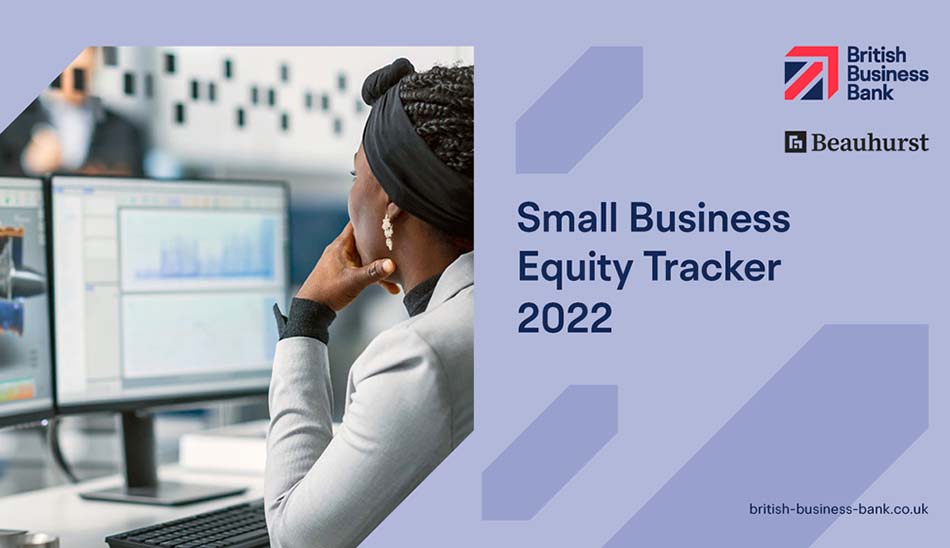 Equity investment in the UK’s smaller businesses increased by 88% in 2021 to £18.1bn compared to the previous year, the highest yearly amount since the Beauhurst data series began in 2011, reveals the British Business Bank’s annual Small Business Equity Tracker, published today. The strong momentum continued into Q1 2022, with £7.6bn of equity investment reaching smaller businesses, the highest amount invested in a single quarter at nearly double that of the £4.3bn in Q1 2021.

“The Bank supported 18% of all announced UK equity deals in 2021, showing that the work we do, and our focus on investing with purpose, has never been more important. The UK’s position as a hub for the technology sector is apparent and the growth in clean tech deals shows an increasing investor demand for sustainable businesses to grow. We will continue to provide businesses of the future with the capital they need to start up and thrive in the UK.”

Small Business Minister Paul Scully said: “The British Business Bank is playing a vital role in helping smaller businesses across the country to not only recover from the global pressures we’ve been facing, but to grow and thrive into the future.

“Equity investment is at the highest levels on record but we’re not going to rest on our laurels. We’re continuing to do everything we can to back UK businesses and livelihoods, including through Help to Grow, increasing the Employment Allowance and slashing fuel duty.”

Investment in UK tech companies has continued to grow rapidly in the past five years, rising to £8.2bn in 2021, up from £4.1bn the previous year. Investment into the UK’s tech-based companies is crucial for building the future economy and strengthening its position as a tech hub in Europe.

As investors adapt to more sustainability driven equity investment, the Bank’s analysis showed a 30% increase in the number of clean tech deals with £436m invested into this sector across 72 deals. While clean tech may have previously been considered a niche sector, it is now attracting mainstream investment as more businesses look to reduce emissions and prioritise low carbon growth opportunities.

The venture capital market in the UK and Europe

The UK retains its position in 2021 as the largest venture capital (VC) market in Europe, larger than France and Germany combined. France, Germany and Sweden have seen faster growth in the size of their VC markets since 2015. In Germany alone, VC investment nearly tripled between 2020 and 2021 from £5.6bn to £14.1bn.

Despite the UK being the European leader in the VC market by investment, it still lags behind the US which has also experienced a year of record growth. VC investment in the US has nearly doubled between 2020 and 2021 from £128bn to £254bn. The funding gap between the UK and US is primarily driven by varying levels of funding going into R&D intensive sectors with the UK having a lower deal and investment share going to this sector.

Overseas investment into the UK continues to grow

In 2021, 753 deals involved an overseas investor, 58% higher than in the previous year and equating to 29% of all deals recorded. Overseas investors were involved in equity deals to the value of £13.5bn, which is equivalent to 75% of the total £18.1bn invested during the period. The US ranks the highest for number of deals its investors make in UK companies, with a yearly average (2019-21) of 303 deals followed by European investors.

The Bank supported around 18% of all announced UK equity deals in 2021, with funds supported by the Bank more likely to invest in technology and IP-based businesses compared to the overall equity market. Between 2019-21, 47% of the Bank’s supported deals were in this sector compared to 39% of the overall market.

Addressing regional imbalances remains core to all British Business Bank activity. As a result, Bank-supported equity deals are more regionally distributed throughout the UK. The Bank has a higher proportion of equity deals outside of London (53%) than the wider PE/VC market (48%).

Seed and growth stage deals supported by the Bank are generally smaller than the wider market, while growth venture deals tend to be larger, showing the Bank’s programmes are tackling market gaps at the key venture stage of the UK SME equity spectrum.