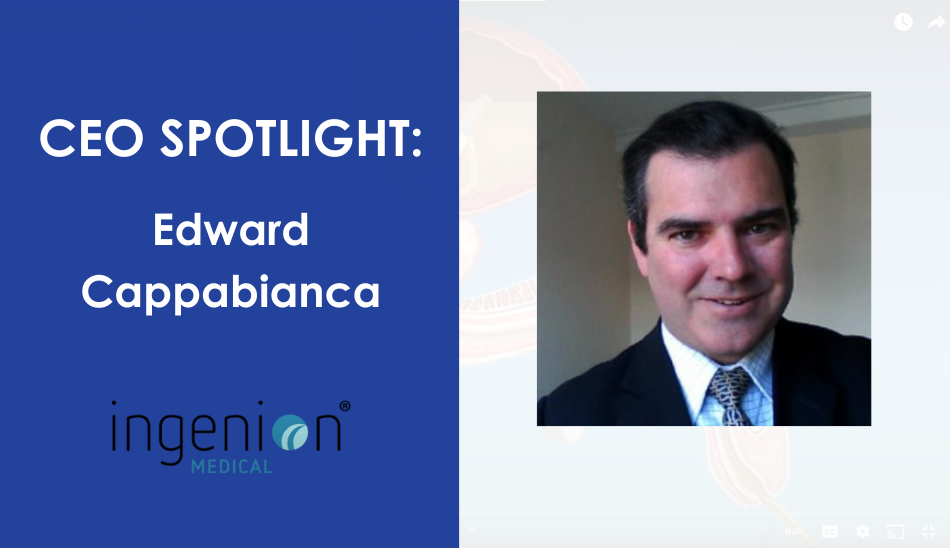 This time our spotlight is on Edward Cappabianca, CEO of Ingenion Medical Ltd. Ed is an experienced Medtech CEO who also has significant prior experience as an investment banker advising early-stage and listed Medtech and Life Science companies in the UK, USA and Europe.

1. What attracted you to join Ingenion?

I was approached by our then Chairman, Alistair Taylor, with whom I had worked very closely as an advisor to Lombard Medical PLC. Ingenion was at an important inflection point, with its lead product in a stage of final development before being ready for submission for CE Marking. I was very impressed with the novel approach of the technology to a problem that has not really seen much significant innovation for many decades. Last, but not least, the nature of the business model is really compelling, which unlike many other medical devices is expected to create a strong recurring revenue base, while also significantly improving the lives of the patients.

2. What is the story behind Ingenion developing bladder management solutions – a market opportunity, problem identified, personal?

The initial idea and technology were developed by Philip Davis, the brother-in-law of our current Interim Chairman, Dr. Sergio Rothstein. Unfortunately, Phil had an accident while hiking on a holiday in South East Asia, and fell down a cliff, which left him a paraplegic, and he was having to catheterise himself multiple times each day when he needed to pee. He found the experience very inconvenient and dehumanising. Fortunately, as he also happened to be trained as an engineer at MIT, he decided to solve his problem and developed the first generation of the CymActive bladder management system, even testing the first prototypes on himself.

On a personal note, a very dear friend of mine suffered from progressive MS for many years. Shortly before I joined Ingenion, he passed away from pneumonia, which had progressed from persistent UTIs that were caused by his long-term catheter use. I feel confident that if Ingenion’s device were available, both his quality of life and life expectancy would have been significantly improved. I am motivated to ensure that our products can improve patients’ lives, as something like a urinary tract infection can have serious knock-on effects for people with conditions such as MS, Parkinson’s Disease, Alzheimer’s, and other similar conditions.

3. Who are your biggest competitors and how do you differentiate yourself from them?

The urinary catheter market is a large, global industry that is dominated by many large medical device companies, including Coloplast, B Braun, Teleflex, Becton Dickinson, Boston Scientific, Convatec PLC.

There are several significant differentiators between Ingenion’s approach and the existing alternatives. One of the most obvious is that our device does not extend outside the body, and as such is intended to work with the body’s own natural defence against infection, as catheter-associated urinary tract infections are a major cost to healthcare systems worldwide. Coloplast’s website states that long-term catheter users can expect to experience 2.7 CAUTIs every year. Our devices also work to give patients complete control over where & when they urinate, which restores patient dignity and is expected to encourage higher levels of mobility and activity, while also encouraging better hydration, which is extremely important to overall health. The anchoring device that Ingenion has developed is also more elegant than the fluid-filled balloons used in current indwelling catheters. Our device ensures that the patient can achieve a completed bladder voiding, which should prevent biofilms and encrustations from developing in the bladder, which is a major cause of blockages.

There are also some other small competitors in the market, some of whom are also trying to solve some of the problems that exist with the current alternatives in the market. If we were trying to solve a problem that no one else was concerned about, then we might be doing something that the market does not need, but that is definitely not the case.

4. What sets you apart as a management team?

The core members of the team all worked closely with Alistair Taylor, and he was instrumental in bringing us together. Each of us has a different set of complementary skills, including finance, business development, and product development, which are combined to bring Ingenion to the next level. We are also collectively very resourceful and agile in terms of being able to find creative ways of solving issues, which is essential for an early-stage company. We also happen to be pretty good at writing (and winning) grants, which is a great source of non-dilutive capital.

5. What was your experience doing the Investor Readiness Program with Stakeholderz?

Working closely with Megan and Graham at Stakeholderz was a really good experience. They were extremely supportive as well as very efficient. Graham helped to put us in contact with a group who really helped us with our company presentation, and we now feel that it tells our story in a strong and compelling way.