In Conversation With: Solveiga Pakštaitė, Founder & Director of Mimica 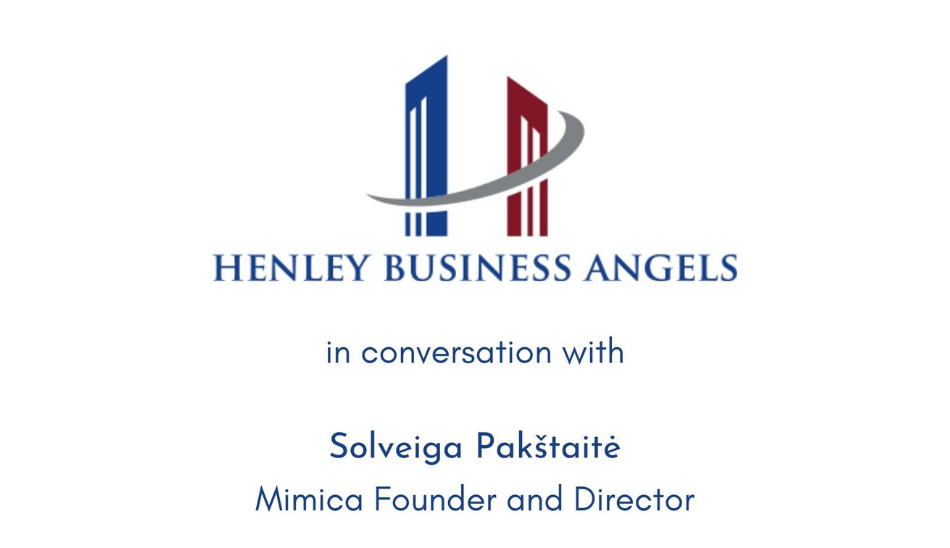 Henley Business Angels is always interested in hearing from innovative tech companies, and when Mimica pitched to the network in 2018, our members were incredibly interested in the concept of the product, contributing investment towards Mimica’s £470k funding round. We sat down with Founder & Director, Solveiga Pakštaitė, three years later, to find out more about the company, their progress since Henley Business Angels’ investment, and Mimica’s plans for the future.

Mimica’s mission is to radically reduce unnecessary food waste. We focus on food waste that’s caused by expiry dates currently set at the worst-case scenario, which causes a lot of unnecessary food waste in Europe. About 63% of food wasted in households is still perfectly edible, so we’re making labels that tell you exactly when food should no longer be consumed according to the actual temperature conditions that the food has passed through – they turn bumpy to let you know when it should no longer be consumed.

How did Mimica come to be?

The concept behind Mimica Touch, which is the name of our product, was actually my final university project while I was studying Industrial Design at Brunel University in London. I never expected it to become a business. I initially started looking at visual impairment and the fact that people with visual impairments don’t have any accessible access to freshness information about food, causing it to have negative health consequences for them because they were choosing longer life, processed foods. Then I realised that we all also waste so much because of the inaccuracy of the system, and that’s not to say it’s purposely inaccurate, it’s because they are fixed that they have to be super cautious because they’re not going to adapt to temperature conditions. It started out as my university project, and then I went on to win the James Dyson Award in the UK and that got a lot of interest from the press and food retailers and food producers who started reaching out to me, and that concept turned into an exciting opportunity. Then I started applying for grants, building lab partnerships and growing a team to make the business happen.

What is the Mimica Touch label? How does it work?

The technology is inside the label or cap, which is a gel that naturally spoils according to the temperature conditions, and it’s calibrated to have the same spoilage characteristics as the target food. We can calibrate the label to be as temperature-sensitive as the product inside, allowing it to follow the temperature journey. The gel chemistry that we have developed is actually responding to those changes in the exact same way, giving a really accurate reading. This means there’s no direct contact between the label and the food inside, it’s simply reacting to those external conditions. We can calibrate the gel to lots of different foods, but right now we’re focusing on juice and meat.

You have said in interviews Mimica is designed to be disruptive in thinking, not in implementation. Have you found that in practice the Mimica touch labels are relatively easy to add into the manufacturing process? Have you experienced much pushback?

Definitely. I think a lot of the food industry would much rather just keep going as they were, but the fact of the matter is that it’s driving so much waste that governments are having to step in, that’s how bad it’s become. They should have been self-governing and making sure we never got in this position, but now we’re beginning to see government targets so they have to do something. That’s why our cap is such a good example. We were doing a project with a big dairy company, and their line speed was incredibly quick, around 200 bottles per minute, and they will sell all of those bottles, so anything to slow down the process is lost revenue for them; it’s a project ender. We found that applying an extra label on the side would slow it down substantially enough that it doesn’t make sense anymore, which is why we integrated the solution into a cap because a cap has to be put on and it’s already there to be added. In that sense, we’ve adapted to make it undisruptive to implement. We’re going to do the same for a flat label eventually: build it into an existing part of the packaging that’s pre-delivered that way; so that’s become a really major part of our thinking in terms of our product design.

When did you apply to Henley Business Angels? What was the outcome?

In terms of the stage of the company, it was some time after getting some grant funding in which allowed us to get some base R&D done, but we were looking to be able to scale so that we could run some initial pilots and testing. We needed some substantial funding behind us and something a little more long term in order to do that. Grants are great because they’re non-dilutive, but they act as a patchwork. I needed to grow a team, so it was the responsible thing to do to have a longer-term investment in the bank so the team felt their jobs were somewhat secure, allowing them to focus on the task at hand and not have to worry about where the next lump of funding is coming from. That’s why I wanted to seek some angel investment, and I’m happy to say that after pitching we did find an investor from the network which was fantastic.

You mentioned that the money you received from that funding round was put towards growing your team, was that all you used the funding for or were there other elements of your business that received some of the funding?

At that time, a big push was to grow the research and development team. There are always other activities to spend money on, but at that time, the core focus was getting the right people into the team to complete the product to the point where we could scale it.

How far have you come since you received investment from Henley Business Angels?

We’ve come on massive amounts. At the time we received the funding, I actually stepped aside as CEO. When you start a company, the founder is CEO by default, so I think it was a really good decision to bring on Laurence Kayson, who has more experience in business scaling strategy and knowledge of, and contacts within, the food industry. I was starting to build this myself, but that didn’t compete with someone who had decades of experience. That was the best thing for the business at the time, and it improved its health.

If I had to guess how many people were in the team at the time, I would say around 4 or 5, which has now grown to 16. We’ve definitely grown, and we were able to grow during lockdown as well, rather than the opposite trend. It feels like a privilege that in a time when so many were losing their jobs, Mimica was able to provide high-quality jobs that are mission and values-led.

In terms of the commercials, which is all down to the team, the product has now come to a place where we can manufacture enough to run pilots, and we’re actually running two live pilot projects at the moment. One is on juice, which is funded by Innovate UK, and the other is for our flat labels on meat, which is funded by the EU. The flat labels project has us working with a consortium of meat companies across Europe, helping us to create a smooth integration by showing us where the least disruptive entry point is. The work we’re doing at the moment and both of those projects are gearing towards a live pilot in early next year.

What are the future ambitions of Mimica Lab? Do you have an exit plan or a strategy at all?

Right now, we’re still at our pre-revenue stage; we’re at the pilot stage, so we try not to think about the exit strategy per se because as soon as you decide on one it changes your decision making. We don’t want the decision to go with IPO or a buy out to take up any bandwidth right now because we want to make the best success of launching our product and scaling to our first few customers.

In terms of our vision, I can say that our intention is to be the global mark of freshness for food, but for other perishable areas as well. We’re beginning to do R&D work on vaccines, which have to be stored at specific temperatures, and there are some horrific waste numbers happening in that area. Conversely, there are also instances where there have been power outages and individuals are walking away believing they’ve been vaccinated, but actually they’ve received a dose that’s been temperature abused, which is much more terrifying to me. Other areas we see ourselves going into are blood and organ donations and cosmetics.

You’ve got a fascinating business, and you mentioned the areas you see yourselves going into, have you thought about the drug industry and the support you would be able to give to those with poor sight and visual impairments?

Yes, certainly, so as I said we want to be giving people assurance about freshness in any area of perishables that are temperature sensitive in any way, but there’s also something to be said about focus, especially at the start. There are 16 of us but are incredibly stretched already and trying to deliver some huge projects with enormous partners, so I think right now we need to focus on getting the very first thing done. Having said that, once we’re a bit more established, certainly we’d be really excited to look into some new areas.

A question I had sort of more generally was what happens when you’ve got a food that’s labelled 4 degrees and people keep it in the fridge but then you put it into the freezer for two to three months before you bring it out to use again?

I’m so glad you asked. Our current products, the ones we’re about to pilot in a few months, aren’t going to be freezable versions because, again, to add the freezable element requires an extra project, but we’re doing that project right now, which is why I’m glad you asked. We don’t want to delay; you could polish and polish and run out of money without ever having launched anything. So, our first version isn’t going to be freezable for juices, but we are hoping the labels for the red meat project will be able to withstand minus temperatures before we launch. Watch this space!