Best of British: British Design Fund CEO Damon Bonser on supporting designers and the future for the sector 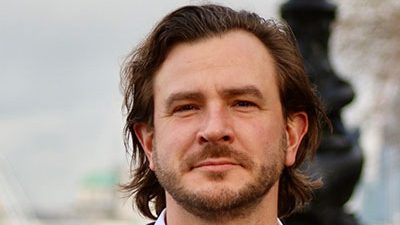 The design economy generated £85.2bn in gross value added (GVA) to the UK in 2016 according to The Design Economy 2018 report. The sector has continued to grow since then despite the uncertainty caused by Brexit and the COVID-19 pandemic. We spoke to Damon Bonser, the CEO of the British Design Fund, to find out how they’re supporting designers and to discuss the challenges of Brexit and the pandemic.

The British Design Fund was founded by Damon in 2017 to invest in and support early stage physical product and manufacturing companies based in the UK. The idea was borne while Damon was working as a mentor for the Design Council’s Spark programme, which gave product designers a chance to commercialise their businesses. It was while there, Damon realised there were few places these inventors could go for funding and support.

“I kicked the idea around for a year and went to talk to as many people as I could such as angel groups and VCs, just to try and find where, if you’re a hardware company or a product company, you could go to get some support and some expertise, as well as a bit of funding. There are grants and government-backed initiatives where you get a bit of grant money but you don’t necessarily get the smart element, and don’t get access to people who know how to launch brands and products.”

“The team came together a few years ago. We got our first fund off the ground and started investing that two and a half years ago now. A big differentiator for us, and for our investments, is the level of support we give to these companies. We’re manufacturers and product guys, people from the creative space so we know the hand holding they need, and many of us have gone through the pitfalls of building product businesses. We know all the pain that they can go through and we know they need that help. If we just put the cash in it wouldn’t be enough. They need that support and expertise too.”

In recent weeks the British Design Fund has been able to announce some significant milestones. Firstly Luke Johnson, Chairman of Risk Partners and former Chairman of Channel 4, has joined the Investment Committee and he will be investing in the fund too.

“We announced Luke Johnson two weeks ago. That’s amazing for us. It brings further credibility to the fund but also even more rigor to some of our process within the Investment Committee. Anyone like Luke Johnson, with his track record, we obviously welcome in.”

The second announcement was that the Wilkinson Family Office is backing the fund and using its Wilkinson Future Fund to invest in the upcoming British Design Fund 2. Damon enthuses:

“The family’s heritage is retail but they are passionate about, certainly through the family office and the Wilkinson Future Fund, supporting early stage British design and product. It’s something they’re doing more across the family business. They understand the support that those companies need. The office is really keen to be involved. They don’t just want to put money in and sit back, they really do genuinely love supporting these start-ups.”

“We passionately think the UK has got a competitive advantage from an IP creation point of view.”

With the UK Government currently negotiating an exit deal with the EU in light of Brexit, will there be more opportunities for British designers or will the change create more challenges? Damon is confident that although changes will need to happen, it won’t have too great an effect. Explaining his position, he says:

“When Brexit happens, the EU will still be a natural place for UK businesses to trade. As long as you’ve built enough margin into your business from day one and you’ve protected your IP, in all fairness you can probably take a bit of a tariff. The user demand should pull it across that border in a way. If you’re working with a French distributor and you’ve developed a simple medical product that makes injections less painful, that’s something that someone in France suffers from as they do in England and in the US. All around the world there’s going to be different trade barriers. You just factor in each territory and price it correctly for that territory. Ultimately, is there a user need or a demand for it that will pull it through? Those are the kind of businesses that we back.”

The other challenge facing the design and manufacturing sector, and indeed all sectors, is the ongoing COVID-19 pandemic. Discussing what he’s seen since the start of the pandemic, Damon comments:

“What we’ve seen since COVID, breaking out, is a shift of behaviour in terms of not necessarily having all your eggs in one basket from a manufacturing point of view, and having certain elements of your supply chain dispersed by not having them all in the same territory. We’ve been working with brands and helping them relocate some of their supply chain because they’ve just been so disrupted through all the manufacturing delays out of China. It can be done.”

One British Design Fund-backed founder who’s seen his business enjoy a surprise surge is Nick White of Eiger Desks. Before the pandemic Nick had been concentrating on selling his desks into schools but with the Government mandated closures, he’s refocused on another revenue stream for his products. Damon shares:

“I remember chatting to Nick in March and told him we didn’t expect him to be transacting over the next few months as the school sector was closing down. We worked with him and said is there something we can do and what other opportunities are there? We started looking at some of the other products they had and there’s a range that we’d never done a huge amount of marketing around. This was a range of retrofitted stand-up desks, but for the professional sector. We started talking about this other line that had never had a huge amount of marketing strategy and Nick said, ‘there might be a bit of an opportunity here because suddenly you’ve got all these people that work for big corporations that are working from home and they’ve got these health and safety departments that have fitted out their desks at work so they’re not having back issues, but now they’re sat at home and they’re starting to get back problems’. He said, ‘this is going to be a problem’.”

Nick’s hunch proved fruitful with him signing up a significant number of the wholesale channels into corporations. Damon suggests that Nick’s business is coming out of the pandemic arguably stronger than it was at the beginning of the year.

Looking to the future, Damon highlights that the British Design Fund still believes in purpose-driven and user-driven design. He doesn’t believe that the pandemic has changed the fund’s outlook.

“Our philosophy remains the same. We passionately think the UK has got a competitive advantage from an IP creation point of view. We have got such good design schools, we produce some of the world’s top design talent and we foster the inventor community here. We still believe that we have a head-start against many other nations in that respect. If you take design seriously and you put the user at the centre of business, there’s things to consider post COVID but ultimately that underlying philosophy remains the same for us. For us, it’s always needs driven.”

Find out more about the British Design Fund at https://britishdesignfund.co.uk/.