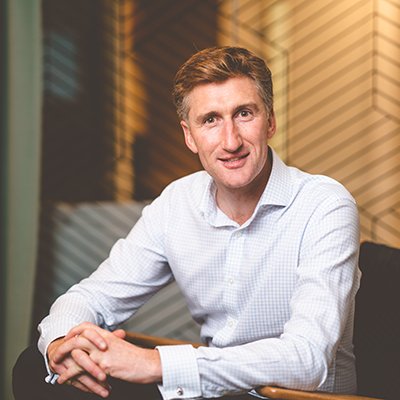 The Angel CoFund (ACF) has £100m under management and at the heart of its investment model it seeks to align itself with outstanding angel investors who bring deep sector experience and a shared ambition to support and scale outstanding entrepreneurial teams. We spoke with George Whitehead, Partner and former Chairman of the Angel CoFund to find out, 8 years on and with 90 companies in the portfolio, the lessons learnt and how the fund is performing.

George has over 20 years’ experience in angel investing and entrepreneurship having started his career running the Oxford Investment Opportunity Network (an angel network that still thrives today). During these formative years he was mentored by Sir Martin Wood, the founder of Oxford Instruments and active angel investor, and quickly recognised how transformational the right angel can be to a business looking to scale rapidly.

Over his career he’s worked at the University of Toronto’s Tech Transfer arm and was Business Development Director at NESTA where he was involved in their £50m Venture Capital fund as well as supporting numerous early accelerators. Most recently George has been Venture Partner Manager at Octopus Ventures, a £1billion Venture fund focused on the Future of Money, the Future of Health and Deep Tech.

“Right from the beginning of my career I’ve seen that if you look for hands-on, engaged angel investors who really know their sector, as a signal to invest, you can make some really smart investments. That was our hypothesis when the fund was set up 8 years ago and that’s exactly what the CoFund has achieved. We’ve had numerous exits, have six companies in the portfolio worth well over £100m each and we are on track to triple the value of the fund”.

The Angel CoFund is sector agnostic and is an active co-investment fund that seeks to achieve consistent returns by partnering with experienced syndicates of angel investors to help fund and scale early-stage businesses. When it comes to looking for a good opportunity George shares:

“We invest across the UK and we’re looking for a number of signals to indicate where there is an interesting opportunity, but the signal that really stands out to us is when a sector smart investor chooses to support a business”.

George believes that passive investing isn’t a strong enough signal so when considering an opportunity, the CoFund looks for active investing where angels can put both their cash (£50,000 or more) and their time into a business. There are considerable benefits to the angel as George explains:

“We’ll go to an angel investor and say, ‘why don’t we compare notes and share due diligence on a deal and let’s work the term sheet together and align interests’. What we found is the smartest angels really get this. They see why it just makes sense to align your interests with a £100 million fund with deep pockets to help fund the next rounds. They get that it’s worth sharing due diligence and questioning some of their assumptions so that they really give the company a good shake before putting in their money and a lot of time into a business. We want the angel to be at the forefront of the deal so we are amplifying their influence as well as giving the companies they back the additional funding and support they need to thrive”.

“Probably the biggest development has been the greater awareness of angel investing with many more people today describing themselves as angel investors, which was really quite rare eight years ago.”

Over his time at Angel CoFund, George has noticed significant changes and developments in the industry. He explains:

“Probably the biggest development has been the greater awareness of angel investing with many more people today describing themselves as angel investors, which was really quite rare eight years ago.”

Whilst George enthuses about the greater awareness of angel investing, he’s quick to point out that some of the fundamentals haven’t changed. Elaborating he reveals:

“We are still finding that most angels keep a low profile because angel investing isn’t their day job. They are running successful companies or have multiple non-exec positions, and they just happen to have found a really interesting opportunity in a sector that they know with a team they respect and they want to get more involved in that specific company. There is undoubtedly much more professionalism in angel investing and more options for pulling together syndicates but ask anyone who is raising funding and you’ll see that the bar is still set very high and sector smart angels do not part with their money easily. My advice to entrepreneurs therefore is to assume a successful entrepreneur is open to becoming an angel investor in your deal rather than assume they are not. Aim high to get the very best talent in to your team and put the same effort your pour in to recruiting a key hire in to recruiting the ideal angel – most angels are hidden and unless you ask them outright if they are interested in investing they won’t reveal themselves to you”

With the government having initiated Brexit at the end of January, does George have any concerns about what they should be doing for angel investors as the exit negotiations begin?

“The UK is in a really strong position right now: if you look at how much venture capital funding there is in the UK, it’s head and shoulders above the rest of Europe. If you look at the culture of entrepreneurship, the number of unicorn businesses that we’ve seen, the number of people who have exited and who are coming back to invest in new companies or start up their next company, again the UK far outperforms the rest of Europe”.

“When making investments you are trying to triangulate, the technology, the team and the timing and with that in mind you can see why investors across the World are looking at the UK. Britain has outstanding Universities and a rich history of developing ground-breaking technology, an increase in experienced talent hungry to grow really scalable businesses at a time where technology means virtually every industry is going through fundamental changes. I think angels are in a unique position to spot opportunities as they are often the experts at the coalface of their industries. They are watching the disruption happening in their specific sector and are uniquely placed to recognise opportunities that have the most potential. The UK Government has been extremely supportive to entrepreneurs and angel investors and if they continue to build on the strong foundations already in place the potential for these companies to become the future engines of the economy is enormous”.

When it comes to emerging trends, George is quick to warn that jumping onto the latest buzzworthy sector isn’t always the best thing to do. He urges angel investors to keep an open mind and resist following the crowd.

“Chasing after the next hot thing means you’re often missing out on the enormous potential for individual companies to create extraordinary businesses in virtually every market imaginable. A genuine open mindedness opens you up to many deals that other investors may well ignore because they’re to be rushing after the latest trends. I’m a little bit sceptical of the simplicity of saying this sector’s hot, this sector is not.”

Find out more about Angel CoFund at http://www.angelcofund.co.uk/

Want to learn more about angel investing? Enrol in our course The Effective Angel Investor at http://bizangels.thinkific.com